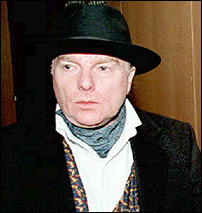 Singer Van Morrison was forced to pull out of two concerts in north Wales over the weekend, after falling and cracking a rib.

Two thousands fans were left disappointed after the star managed just two songs during his first night at the seaside resort of Llandudno. The singer shook his head and left the stage at the North Wales Theatre without comment on Friday night.

Support act Chris Farlowe was brought on to sing one song with Van Morrison's band and then the theatre manager came on stage to announce the singer had fallen earlier in the day.

The manager said the singer was unable to carry on with the performance and the show had to be cancelled.

The singer's online fanzine Wavelength also reported the rib injury and said the concert had been halted after 25 minutes. The website said it was waiting to hear if the singer's concert in Antwerp would go ahead or be cancelled.

Van Morrison and Chris Farlowe were performing an evening of jazz, blues and soul, with tickets costing up to £27.

The theatre is now contacting everyone who bought tickets for the two shows with a view to rescheduling the events, but the dates have not yet been arranged.

In January, a sex discrimination claim against Van Morrison ended after a former employee dropped her allegations at an industrial tribunal in Cardiff.

The sister of rock'n'roll legend Jerry Lee Lewis, Linda Gail Lewis, had accused Morrison, 57, of trying to ruin her life by asking her for sex and telling her to divorce her husband.

Miss Lewis, 54, of Penarth, south Wales, a singer-songwriter who toured with Morrison, withdrew five sex discrimination claims against the singer following six hours of legal discussion at the tribunal in Cardiff on Monday.

She claimed Morrison had "publicly humiliated" her on stage in the United States while she was touring with him.

Van Morrison accepted a full apology and comprehensive retraction of the claims by the singer.

Miss Lewis had earlier lost a claim of unfair dismissal – she had said she was sacked with three months left of a tour after working with Morrison for nine months.
According to BBC.co.uk