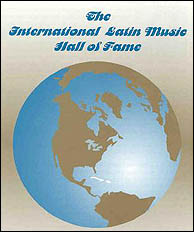 "Once again we are very pleased to announce this year's fantastic group of inductees," said Joe Hernandez, president of the ILMHF. "With each passing year our organization receives more and more corporate support and recognition as an important cultural organization. The event will again be filmed for television."

This year's special guest performers are Roberto Torres "El Caminante" and "Candido." Among those attending this year is actress Sonia Braga, who will accept the induction award on behalf of Astrud Gilberto.