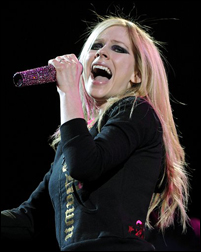 KUALA LUMPUR, Malaysia (VIP NEWS) — The Pan-Malaysian Islamic Party (PAS) has called for a ban on Avril Lavigne, who is due to play an Aug. 29 concert in Kuala Lumpur's 45,000-capacity Stadium Merdeka.

In a memorandum issued to the Unity, Culture, Arts and Heritage Ministry and to the Kuala Lumpur Mayor, Federal Territory, PAS Youth Chief Kamaruzaman Mohamed requested that the authorities ban the Sony BMG artist's concert because "rock and punk is not suitable for the young generation" particularly in the month when the country celebrates its 51st year of Independence.

A spokesperson for the concert promoter Galaxy Group says it has assured the authorities that Lavigne will comply with local regulations including her choice of attire and showmanship.

"The PAS Youth Council is not being logical in calling for a ban of Avril's concert," suggests Sandy Monteiro, chairman of the Recording Industry Association of Malaysia (RIM). "The fact that we are able to attract A-list stars like Avril is a plus for our industry. The narrow-minded opinion of such groups sets us back to the dark ages."

The core policies of PAS are based around establishing Malaysia as a strict Islamic state. It is one of three parties in the Pakatan Rakyat coalition, which won 82 of Malaysia's 222 parliamentary seats in the general election held earlier this year.

Malaysia made global headlines when the authorities slapped a ban on Sony BMG recording artist Beyonce's concert last September referring to the singer's stage performance and raunchy outfits as the official reason.

Lavigne's Kuala Lumpur concert is part of her world tour covering Singapore, Taiwan, South Korea, the Philippines and Japan. As yet there has been no suggestion from the authorities that the concert would be cancelled. According to Billboard