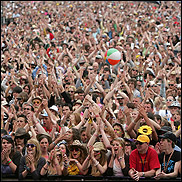 ISLE OF WIGHT (CelebrityAccess MediaWire) — Not every old-line festival in the UK has been suffering from limpid ticket sales – The Isle of Wight Festival, which took place from June 13-15th was by all accounts, a smashing success.

The 55,000 tickets available for the festival sold out within hours of going on-sale and when combined with great weather (for the UK), and a strong lineup made for a good weekend by all accounts.

This year's lineup featured a blend of the old and new, with performances from rock icons such as The Police and The Sex Pistols along with new talent such as The Kaiser Chiefs, N.E.R.D. and The Kooks.

The festival also provided a space for up-and-coming local talent to showcase their chops. Local outfits Kosmic Debris and Proximity Effect made it onto the main stage, while The Bandstand played host to more than 50 local bands.

John Giddings told the BBC: "We've had some of the best performances ever. The future is to make it better, not bigger, really. I'm honestly sure that people want more intimate events – there are a lot of festivals around so you have to be careful about who you book and make it a good experience."

First held in the late 1960s, the festival grew in popularity until the British Government effectively shut the event down in 1971 after it drew much higher than planned for attendance. The festival was revived by John Giddings in 2002 and after a rocky start has become one of the brightest stars in the firmament of the UK festival scene, netting a 'Best Major Festival' prize at the UK Festival Awards last year. Expect Isle to be in the running this year as well. – CelebrityAccess Staff Writers