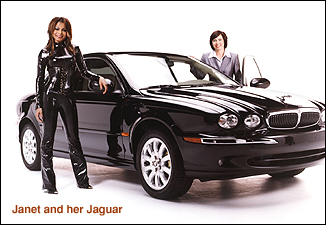 Jaguar North America has come on board as the tour sponsor of Janet Jackson's "All For You World Tour 2001" with its new Jaguar X-Type model.

Each concert will kick-off with a specially produced video featuring Janet Jackson along with a black Jaguar X-Type. The opening video was produced by Spike Lee's 40 Acres and a Mule Filmworks, Inc. and was directed by Dave Meyers, who directed Jackson's "All For You" music video.

"We are pleased to be the first concert tour driven by Jaguar," says Roger Davies, manager for Jackson.

"Jaguar's relationship with Janet Jackson is a powerful statement of our intentions to become more accessible to a new generation of Jaguar owners," says Michelle Cervantez, vice president of marketing for Jaguar North America. X-Type is Jaguar's first all-wheel drive model, and goes on sale in North America Aug. 1.

Jaguar's partnership with Jackson's world tour provides billing in the tour title, inclusion in all tour advertising, promotion, publicity and printed tickets. At each venue, Jaguar will exhibit the new X-Type and display logos on screens, banners and signs. In addition, Jaguar will give away a two-year lease of an X-Type through radio promotions.

Jackson's tour, promoted by Clear Channel Entertainment (formerly SFX), kicked off July 7 at the Rose Garden in Portland, Ore. and winds down Oct. 13 in Denver. The tour then heads over to Europe, where she will perform 25 shows in 10 countries.