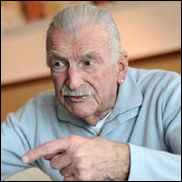 
The German-born musician`s manager said he died at his home "peacefully and in the presence of his family".


Last sold millions of records with his trademark "happy music" – upbeat versions of pop and classical favorites performed by his orchestra.


He appeared at the Royal Albert Hall in the spring as part of a farewell tour he announced after becoming seriously ill last year.


Last started his music career in the 1960s, making instrumental recordings as James Last and His Orchestra – a big band with additional strings and a choir.


Born Hans Last, his record company changed his name to James to make him sound less German when his debut album came out in the UK. He was not consulted about the change – but went along with it.


During his career, he charted with 65 albums in Britain alone, and at his peak was creating two albums a month.


He gained a large and loyal fanbase – but was derided by many music purists who did not like his middle-of-the-road versions of classic tunes.
The star played his final concerts earlier this year


His illness took a "life-threatening" turn last September and apparently forced him to face the fact that "a man full of plans, needs to not just slow down but give up his life on tour altogether".


That led him to announce his final British shows – his 89th and 90th concerts at London`s Royal Albert Hall – which took place in March.


"I can`t talk about goodbye – it`s a terrible feeling," he told the BBC at the time.


On Wednesday, the musician`s manager said: "Mr. Last passed away yesterday in Florida, peacefully and in the presence of his family.


"In him, the world loses a unique ambassador whose expressive and all-encompassing language was music.


"We bid farewell to the man, friend and visionary, who by his impressive strength and openness, his professionalism, modesty and love of life served as a role model and as an inspiration for many generations worldwide."


A public memorial service will take place in Hamburg, Germany, in the coming weeks.