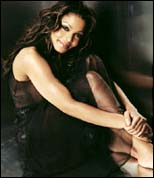 The start of Janet Jackson's "All For You" tour, scheduled for July 5 at General Motors Place in Vancouver, B.C., has been postponed to July 9 due to production problems with the stage, designed by noted set designer Mark Fisher, arriving late due in part to two holidays, Canada Day and Independence Day. Jackson's tour will now kick off on July 7 in Portland, Ore., while her July 10 show in Edmonton, Alberta, has been canceled. Vancouver was close to a 13,000-seat sellout, but only a few thousand ducats were sold in Edmonton.

"This production is so big, and there are so many pieces coming from different places," said Shane Bourbonnais of SFX Music Canada. "Unfortunately, all the pieces didn't arrive in time, and Janet Jackson wasn't prepared to put on a show that wasn't 100 percent. She's a real perfectionist. She's a world-class artist."