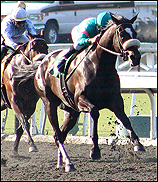 LOUISVILLE, KY (CelebrityAccess MediaWire) — Move over Seabiscuit, Zenyatta, a fleet-footed female thoroughbred, is making waves in the horse racing world. If Zenyatta wins her next race, the prestigious Breeders Cup Classic on Saturday, it will let her retire with a perfect record of twenty wins and no losses.

Owned by A&M co-founder Jerry Moss and his Wife Anne, Zenyatta was named after the third album by the band The Police, "Zenyatta Mondatta." The Mosses count Police frontman Sting among their close friends, and they also own Giacomo, another championship runner who is named after Sting's son. Police-related horse names may be a winning theme; Giacomo netted the Mosses the the largest ever first-place purse of $1,639,600 from the Kentucky Derby in 2005.

Zenyatta was the first female horse to ever win the Breeder's Cup and the first horse in history to win the Breeders Cup twice. If she wins on Nov. 5th, she'll have her third Breeders Cup as well as the record for all-time leading female earner in North America with winnings of $5,474,580 and the record for the largest unbeaten streak in American horse racing history.

"It was beautiful and it looked like she had a lot left," Jerry Moss told the New York Daily News after watching Zenyatta race last week. "It was the kind of work you want."