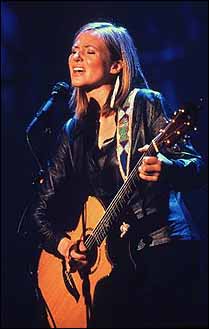 Singer Jewel is determined to continue touring even as she recovers from being thrown from a horse.

Doctors have told Jewel that she should be able to sing in about two weeks, although it will be another four to six weeks before she can play guitar.

She wants to continue with her European tour, set to begin May 10. Her guitar parts will be played by her band, and she should be able to play by the time her North American tour opens on June 14. She's expected to recover fully within 12 weeks.

Jewel was thrown from a horse last week while visiting the central Texas ranch of her boyfriend, rodeo star Ty Murray. She has a broken collarbone and first rib, as well as bumps and bruises.