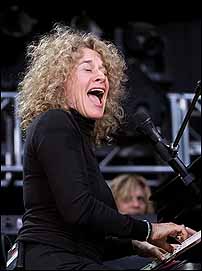 Carole King will receive the Johnny Mercer Award from the Songwriters Hall of Fame at the induction and awards ceremony on June 13.

Stevie Wonder will receive a lifetime achievement award. Garth Brooks will be honored with the hitmaker award. The event will be held at the Sheraton New York Hotel & Towers.