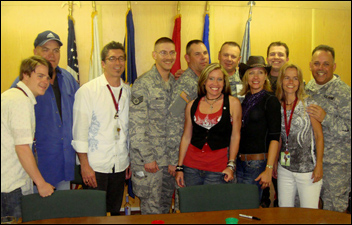 "This was my first AFE Tour," says Jonalee. "As a matter of fact this was my first time out of the U.S. A friend recommended us for the tour. Many of us in the band had ties to troops either serving or who had served in the military, therefore their encouragement was our initial motivation. As the tour grew closer my involvement with The Yellow Ribbon Support Center in Cincinnati brought even more awareness to the band for the need to bring a little bit of home and entertainment to our troops abroad. Once we arrived in Sicily we were overwhelmed by gratitude. I guess my drummer Jeff Peters said it best, 'Up to 30 minutes ago I knew I was doing a good thing, but really didn't know why I was here.' The soldiers and sailors that we met were sacrificing their homes, families, loved ones, and their lives every day, but yet were so appreciative to us as though we had made the sacrifice. I think we talked for hours to the troops. The performances came second. We knew from that first day of the tour our role was not only to entertain, but to listen, offer support, and friendship to every man and women serving our country."

Everyday with the troops was memorable and will never be forgotten! From the mess halls, to the volleyball games, to snorkeling in the Red Sea, each base has left us with a lasting impression. Upon our return we were greeted by 19 of our families and friends at the airport….I felt honored to be recognized for what we had accomplished. I hope we as Americans remember and recognize the sacrifices being made by so many that provide us our liberties, luxuries, and freedoms here at home!

It's hard not to sound patriotic after this tour! I am already asking "what can I do now for the troops!" Please ask yourself the same question. How much time can you spare to bring a little bit of home to our troops! For additional information on AFE Tours, check out ArmedForcesEntertainment.com."


Jonalee White's new single, "Perfect Angel" (CDX #475), the first from her upcoming sophomore CD, is currently impacting country radio. Jonalee White wrote nine of the thirteen songs on her debut album, Wake Me (released on March 25, 2008 on Lick Records), that produced three singles, Wake Me, I Break and Sunday Paper, which all broke Top 40 on the MusicRow CountryBreakOut™ Chart.