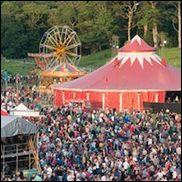 KERRY COUNTY, Ireland (VIP NEWS) — Ireland’s Killarney Festival of Music & Food, due to feature acts such as Duran Duran, Burt Bacharach, Texas and Jools Holland, has been cancelled just two days before it was due to take place.


The two-day event, which has been held in Westport, Co Mayo for the past three years, was hoping to attract 36,000 people.


However, Kerry County Council was recently informed that the attendance would be under 5,000 for each day.


The organizers of the festival said that the festival will not go ahead "due to unforeseen circumstances beyond their control".


A spokeswomen for the festival said: “We are devastated that the festival has been cancelled – we did everything in our power to make it happen this weekend.


“We would like to extend our sincere apologies to all the festival goers who were planning to attend the event in Killarney and we would like to thank all the local businesses and statutory agencies for their help and support.”


“The promoters are currently in discussions with some of the acts, about performing, in an alternative indoor venue in Killarney over the weekend and hope to make an announcement as soon possible.


Yesterday, festival organizers said that the festival was to relocate from Killarney House Demesne to Killarney Racecourse.