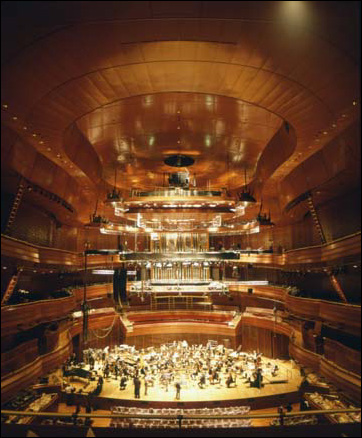 This weekend (December 14-15), Philadelphia's $265 million, 150-foot glass domed Kimmel Center for the Performing Arts, which houses the 2,500-seat Verizon Hall and the 650-seat Perelman Hall for smaller musical and theater groups, will have its gala opening.

The versatile Verizon Hall, that with the push of few buttons can adjust the room's acoustics to fit any particular program, debuts December 14 with a $5,000-per-ticket show headlined – at the request of benefactor Sidney Kimmel – by Elton John.

The center's four levels of public space offers restaurant, bars, art galleries and informal meeting areas. In additionn to the Philadelphia Orchestra, other resident companies will include Peter Nero and the Philly Pops, the Philadelphia Chamber Music Society and Philadanco, a modern dance troupe.

Among its production features are the capability to add seats, drop sound-absorbing curtains, and a revolving two-sided stage, allowing for quick changes between shows.