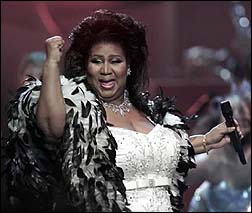 NEW YORK (AP) _The Queen of England is celebrating her anniversary and she wants Aretha Franklin there.

The "Queen of Soul" will perform at the celebration for Queen Elizabeth's 50th anniversary of her ascension to the throne. Franklin will perform four or five songs for 15,000 people who will be invited to Buckingham Palace on June 3.

Franklin calls it a once-in-a-lifetime opportunity. "You just don't get that many invitations to sing for the Queen of England," she says.

Last month, Franklin filed a $50 million defamation lawsuit against the publisher of the Star tabloid magazine, alleging it fabricated a report that she abuses alcohol. The claim filed in U.S. District Court in Detroit, alleges the article has "subsequently impaired her ability to pursue her chosen profession."