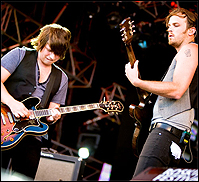 ROSKILDE (CelebrityAccess MediaWire) — Kings of Leon frontman has come down decidedly in favor of Roskilde. While performing at the Danish festival on July 4th, the band's frontman Caleb Followill told the crowd that his preference was for Roskilde.

"We’ve played some pretty big festivals already on this tour – we’ve played one small one and one pretty big one," Gigwise reported Caleb as saying, referring to their performance at Glastonbury a week ago, "but I’ve gotta say, this is my favourite crowd."

The Kings of Leon have been touring Europe on the festival circuit with performances at Oxegen, T in the Park, Summercase, the V Fest and the American All Points West festival on the horizon.

The festival was quite well-recieved by reviewers and fans alike this year. In contrast to the mud and rain of last year, hot and sunny weather ruled the week as 67,000 festies made the scene. – CelebrityAccess Staff Writers