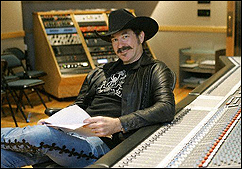 According to the Tennessean, Brooks recently warned Nashville business leaders that unless there is a financial incentive for artists, the festival is little more than a "house of cards."

I feel like we're at a serious crossroads with this festival," Brooks told the business community during a breakfast address. "We have a danger, in my opinion."

The festival has become a huge success over the years with the city pulling in roughly $21 million from the event last year. Local businesses thrive, even local schools get 600,000 cut – everyone that is, except for the artists says Brooks.

"You can play to artists' emotions by saying, 'Hey, this is for the fans,' " Brooks said. "But it's not like it's a free concert. We've built a really nice piece of business here that is dependent on free talent. It needs to be an economic model instead of a volunteer model. The label heads can only go and beg these artists to do this so many times."

CMA Chief Operating Officer Tammy Genovese told the Tennessean that "We've been having conversations with our board and with Butch Spyridon [president, Nashville Convention & Visitors Bureau] about potential growth: Do we bring in performers from other genres, to make the event bigger? Do we need to pay the artists at some point? If we do need to pay the artists, I believe Butch would be right there with us." – CelebrityAccess Staff Writers