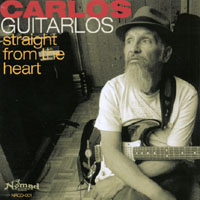 LOS ANGELES (AP) — Carlos Guitarlos, an icon of the Los Angeles music scene, was celebrated by the City Council as one of the city's homegrown treasures.

Musicians from Los Lobos to Willie Nelson have remade Guitarlos' songs. Rockers Van Halen performed an homage to his band Top Jimmy on its album "1984."

Councilman Eric Garcetti on Friday called Guitarlos "one of the great icons not only of Los Angeles music but music in the United States." Council President Alex Padilla cited Guitarlos as an example of "what's great about Los Angeles."

Guitarlos was once a member of hard-living '80s bands Top Jimmy and the Rhythm Pigs, and more recently has been playing on the streets of San Francisco.

"I'm part of LA, I always have been, I always will be," said the graying, bearded Guitarlos, whose real name is Carlos Ayala.

The council was treated to a sample of his new CD "Straight From the Heart."