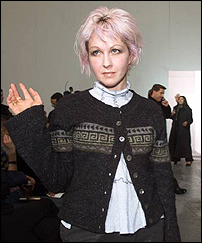 (CelebrityAccess News Service) — Cyndi Lauper, Debbie Harry of Blondie and Joss Stone are joining previously announced Patti LaBelle and Jessica Simpson on stage at this year's "VH1 Divas." "VH1 Divas" will air live from the MGM Grand in Las Vegas on April 18. Additional performers, presenters, and special guests will be announced as they are confirmed.

VH1's "Divas" specials raise funds for the VH1 Save The Music Foundation, a non-profit organization dedicated to restoring instrumental music programs in America's public schools and to raising awareness of the positive impact that music participation has on students. Since VH1 Save The Music was created in 1997, more than $25 million worth of musical instruments has been donated to 1000 public schools in 80 cities, improving the lives of more than 500,000 children.