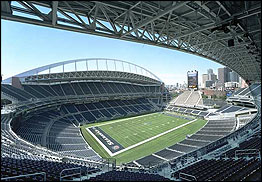 Union leaders complained that a nonunion firm, Event Resource Management, has been hired for every concert at Qwest Field, despite an agreement signed by First & Goal in 2003 saying that the stagehands union would be the “preferred provider” of concert workers, according to the Seattle Times.

The union has claimed that ERM provides no health benefits and underpays employees, even bouncing several checks after last year’s Rolling Stones concert at the stadium. ERM is also locked in a dispute with the state over unpaid industrial-insurance taxes.

Unions supported the construction of Qwest Field and have a right to demand good treatment for works, David Freiboth, executive secretary of the King County Labor Council, told the Times. “They want public funds to build these and then they want to screw the workers? We’ve got a problem.”

Union officials are demanding that First & Goal force promoters to hire union workers for concerts at both Qwest Field and the new WaMu Theater in the attached Qwest Field Events Center.

First & Goal has said the company wants all workers to be treated fairly, but that a union-only contract was too restrictive for concert promoters.

“We felt that it was in the best interests of the building to allow the promoters to choose who they do business with,” Martha Fuller, CFO for First & Goal, told the paper.

John Morrison, co-owner of ERM, told the paper that the union leaders were lying about his company to shut out the competition: “They’re like little children. They complain about most things…I think the marketplace is best served with competition.”

Union leaders have brought their complaints to the Public Stadium Authority, the public board that oversees Qwest Field. –by CelebrityAccess Staff Writers