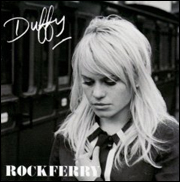 So I'm cruising up 20th Street, accelerating in my Saabaru, since that's the only thing it's good for, to get ahead of the car in the left lane before it holds me up waiting to turn. And as I sit at the

light, noticing the cop in my rearview mirror, the idiotic deejay on Sirius' Spectrum starts reciting all the records we just heard, which I didn't, because I hadn't left my house that long ago. Then she

says she believes the intro of this Duffy song sounds just like "Stand By Me" and that's got me paying attention as the song starts to play.

Utterly ridiculous. Oh, I can understand where she's coming from, the deejay that is, but I would never have come up with that.

And the song is playing, it's so simple, I'm not addicted, but it's not so bad that I've got to switch the station. Then, just shy of two minutes in, there's this change and I look down at the radio, I'm

hooked! I remind myself to steal this when I get home. I've got to steal it, because you can't buy it on iTunes, it hasn't been released in the U.S.

But I forget, and it's only when I'm cruising through the e-mail, reading "Record Of The Day", do I see that this very song is set to remain at number one in the U.K., and that the Feeling is headed for

number one on the album chart.

The Feeling, I love those tracks. The band can be a bit cheeky and jive live, they're too British for American audiences, but that doesn't come across on record, the music is pure pop! But none of the

singles had an impact. The album stiffed over here. Because Top Forty radio, the only format that counts in the U.S., is an urban ghetto. Oh, of course there's pop there too. But not this kind of pop.

Pop on U.S. Top Forty is plastic, overdone, evanescent crap by TV contest winners or Clive Davis prodigies. If 10cc's "I'm Not In Love" was released today, it would have no chance, never mind "The Things We

Do For Love". Both classics. The Feeling's tracks are not quite that good, but they're very good!

But Duffy is something completely different. It sounds like it was cut in America in the midsixties, before the country had become completely infatuated with the U.K., before FM took over from AM. It

sounds like a 45 you spun in the basement with the lights low as you inched your spiked shoes and sweater-encased chest up to the opposite sex, copping a cheap feel. "Mercy" sounds like the fourth side of

the "Quadrophenia" movie soundtrack. Hell, "Mercy" would have fit in quite well in that flick.

I don't know the backstory. I know in Britain everybody knows every detail. They probably already hate Duffy. Maybe she's a fake. Maybe she didn't write the song. Maybe people believe it sounds too

similar in places to "Chain Of Fools". All I know is that it impacted me. I heard it and wanted to hear it again!

And now I've got the video on endless repeat on YouTube. It's infectious.

You only get an excerpt on MySpace, as a result of the Universal war on the social network. And you can get a free track (not the single) on Duffy's Website, but you've got to register. You can use a fake

name, but when you're done, you end up with a WMA file. WMA is HD DVD
to MP3's Blu-Ray. Nobody wants a WMA. Probably encrypted to boot.
To prevent further trading. And, the way it works is you don't cull e- mail addresses up front, those are worthless. You ask people for their e-mail addresses, you want permission, you want to grow the

relationship! People are savvy, they know you want to spam them in the future. Don't they get the choice? That's Universal Music for you. Mafia men with a hint of Gestapo added in.

Even without airplay this record would spread over here. But, will it get that Top Forty airplay? When I first heard "Mercy", I thought no. It sounds like nothing else on the radio. But it's so damn

good, I believe stations will spin it. Maybe Amy Winehouse has paved the way, opened the door.

"Mercy" might not be fresh to denizens of the sixties, but to a young 'un, it sounds like nothing else on the radio. It's exciting! This is the old AM radio hit, the hypodermic to the heart. This is how

we revitalize the business. With stuff like this, which isn't a clone of what came before. Then again, by time the label is done ramming this down our throats, hyping Duffy ad infinitum, we'll want nothing

to do with her anymore. There won't be a career, just a single.

Meanwhile, check this out. E-mail your buddies. You can be cool for a week or two.

(Don't bother to look at the images, don't e-mail me about the bad sync, just listen!)