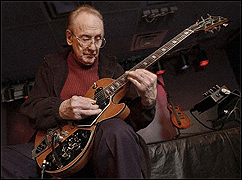 WAUKESHA, Michigan (CelebrityAccess MediaWire) — One of Waukesha favorite sons, Les Paul will be returning there on May 10 for a benefit concert. The concert is being held to raise funds for a museum being built to honor the guitar legend.

Originally born in Waukesha in 1915, Lester Polfuss AKA Les Paul is widely regarded as the inventor of the solid-body electric guitar, (Leo Fender & Adolph Rickenbacher fans might contest this distinction.) Paul is also known for the innovation of the multi-track recording. First released on Capital Records in 1947, the record started as an experiment in Les Paul's garage where he recorded 8 different guitar parts in wax disks and then combined them into one. He later footed the bill for Ampex to design and build the first 8-track magnetic tape recorder.

During this time, Paul continued to perform regularly, issuing a succession of hit records throughout the 1940s & 50s. He went into semi-retirement in the 1960s but hasn't dropped off the radar, being recognized with awards and making public appearances, the most recent of which was netting two Grammy awards for his album Les Paul & Friends: American Made World Played. Despite having sever arthritis, Paul also performs weekly with pianist John Colianni at the Iridium Jazz Club in New York.

The museum, estimated to cost $3 million dollars when it opens in 2010 will chronicle his accomplishments and showcase collected memorabilia. Tickets are available on the Waukesha County Historical Museum's website. They aren't cheap though – a "premium table" for four will run you $1,500 while general admission is available for $300.

Additionally, a screening of the PBS documentary Les Paul: Chasing Sound" will be shown the night before by Glenn Aveni, the executive producer of the film. – CelebrityAccess Staff Writers