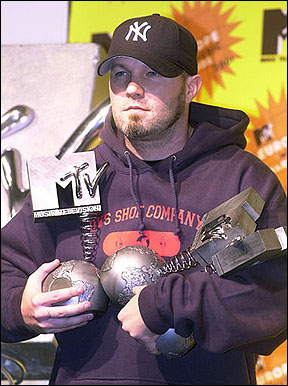 In a website post filled with obscenities, Limp Bizkit frontman Fred Durst lashes out
at the critics of the band's method to find a replacement for guitarist Wes Borland, who
left the group last year. Some of those who auditioned complained they were only
given 60 seconds to show their stuff and had to sign a disclaimer.

In part, the post reads, "Anyone who is mad about their experience trying out for limp
bizkit at guitar center simply and plainly 100% sucked,!!" Durst said on the group's
website. "There are a lot of people waiting to audition each day and when they come
in the room to play guitar
they get up to 60 seconds to give us a sample of what it is they do and what
they're about. If at any time during the 60 seconds they are interrupted, or
asked to stop, then that is their (read between the lines) answer to how "not
the right vibe" they are for anything pertaining to limp bizkit or any project
limp bizkit is working on. But if they were asked to continue playing or asked to play
with the band later that evening, which has been over 20 people on the whole tour,
then there was something that was interesting enough to spark our curiosity.

"People who are auditioning are asked to sign a release so their images and likenesses
can be used in any documentary that limp bizkit would like to make (mtv, website,
etc) in no way whatsoever would limp bizkit ever steal or take anything
(music, riffs) from anyone on this planet!! We did not record any of the preauditions.
Not one."

No guitar replacement has been named yet.