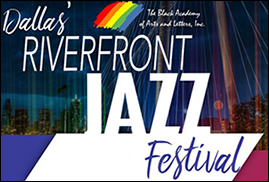 Set for September 1-3rd at the Dallas's Horseshoe Park, the festival will feature three stages of music with both local and nationally recognized touring artists. Other acts on the bill include Najee, Euge Groove, Oleta Adams, Peter White, Rachelle Ferrell and Ruben Studdard.

Erykah Badu, Will Downing and Najee are also serving as Honorary Chairs for the festival, which is being organized by The Black Academy of Arts and Letters (TBAAL).