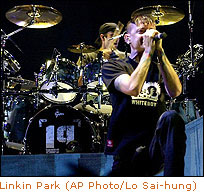 (CelebrityAccess MediaWire) — Linkin Park has settled its contract feud with Warner Music Group, inking a reported five-album, $15 million deal with the company on December 27th. The pact reverses an earlier demand for release from its existing deal with Warner Bros. Records. As part of the agreement, Warner Bros. Is reported to be paying the band an estimated 20 percent royalty rate.

Tensions rose when Linkin Park put the brakes on its forthcoming album, publicly citing concerns about the competitive impact of WMG’s aggressive cost cutting strategies and the planned use of proceeds from its initial public offering last May.

The two sides were reportedly far apart on talks concerning a new deal for the bank, with Linkin Park looking for a contract worth $60 million.

Melting tensions were apparent at the Billboard Music Awards when guitarist Brad Delson told Billboard.com that “we’re resolving our differences and we’re looking forward to putting out a record next year.”