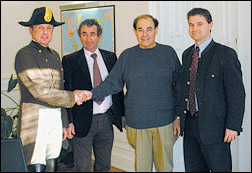 The signing took place on in the offices of the Spanish Riding School of Vienna where Mr. Lashinsky and Mr. Aigner concluded negotiations to return the School to the U.S.A. in 2008.

Thirty Lipizzaners and their riders will be brought from Vienna, Austria in November 2008 to tour major markets on the west coast including, Phoenix, AZ, Los Angeles, CA, the San Francisco Bay area, CA., Portland, OR and Seattle, WA.

Tickets will go on sale during May 2008, six months prior to the planned engagements. Specific venues, dates and prices will be announced at that time.

Says Lashinsky, "White Stallion Productions Inc., is very proud of its long-standing relationship with the Spanish Riding School of Vienna and the opportunity to bring this marvelous equestrian institution and it’s culture of the Lipizzaners back to the U.S.A." – CelebrityAccess Staff Writers