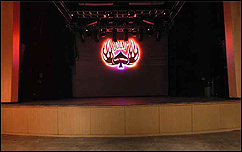 “All of us at AEG Live are proud to be booking the premiere rock concert hall in the country,” Larry Vallon, Senior VP of National Booking said in a statement. “The Joint’s rich heritage of showcasing the best rock bands in an acoustically perfect environment is well known in the artist community, making it the venue of choice in Las Vegas!”

“Entertainment is a key element in the ongoing success of the Hard Rock Hotel & Casino,” said Randy Kwasniewski, President and Chief Operating Officer of the Hard Rock Hotel & Casino. “We look forward to working with AEG Live as we continue to elevate and enhance the entertainment experience with unique talent and unmatched performances within The Joint concert venue.”

AEG has already put on shows by Katt Williams on February 17 and 18, and has several on the books, including 30 Seconds to Mars on Feb 24, Seven Mary Three on March 2, Joan Jett & the Blackhearts on March 3, Mike Epps on March 10, and AFI on March 11. –by CelebrityAccess Staff Writers