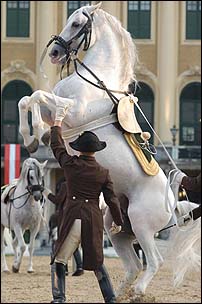 OVIEDO, FLORIDA (CelebrityAccess MediaWire) — For the first time in more than 15 years, the Spanish Riding School of Vienna and its amazing troop of 30 dancing Lipizzaner stallions are coming to America for an extensive fall tour. The dates coincide with the 60th anniversary of U.S. General George Patton rescue of the 425-year-old Lipizzaner breed. Said White Stallion Productions Inc. tour producer Gary Lashinsky, "This is an appropriate time for the the Spanish Riding School to say ‘thank you' to America".

The stallions and their riders, have performed all over the world ever since the founding of the Spanish Riding School of Vienna in 1572. The School maintains equestrian skills and traditions passed on for centuries, dating back to ancient Greece and refined in Vienna over hundreds of years. The Lipizzaner breed, developed at the height of European horsemanship, was at first intended for warfare, but over time the horses became the most dexterous performing equines in the world. Trainers take the natural movements of the horse and over a six to eight-year period develop the intricate movements that brought fame to the Lipizzaners. From trotting in place to pirouettes, the horses perform feats that have astounded audiences around the world.

In war-torn Austria during World War II, the school and its horses stood at the brink of destruction, but General Patton's 2nd Cavalry saved them. The story was recreated in the 1963 Disney film "Miracle of the White Stallions," starring Robert Taylor, Eddie Albert and James Franciscus, and released on DVD for the first time this past year.

Added Lashinsky, "The Spanish School of Riding is considered the Harvard of the equestrian world and this upcoming tour will be a show unlike any other tour" Today, the breed stand's alone in the world, as the best of the best, a cultural icon of good will from the city of Vienna. – CelebrityAccess Staff Writers