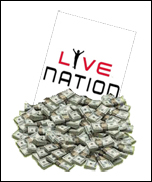 LOS ANGELES (CelebrityAccess MediaWire) — Live Nation Entertainment has tapped creditors, including JP Morgan Chase, Goldman Sachs and Deutsche Bank AG for 1.2 billion in loans to refinance their debt in the wake of their acquisition of Ticketmaster Entertainment.

As part of the re-fi, Live nation sold $250 million in senior notes which come due in 2018 in a private offering.

According to Bloomberg, Live Nation had credit facilities of that amounted to $1.49 billion with Internet rates ranging from 2.25 to 4.5% above Libor (London Interbank Offered Rate – the interest rate that banks borrow unsecured funds from each other.)

"We're extremely pleased with this refinancing which allowed us to simplify our capital structure and provides us with substantial liquidity to meet our expected capital requirements for the foreseeable future. The refinancing has also allowed us to complete our organizational re-alignment with the merger of Ticketmaster into Live Nation creating additional cash flow benefits for the company," stated Michael Rapino, CEO of Live Nation. – CelebrityAccess Staff Writers