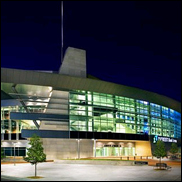 The 15,000 capacity arena, operated by SMG on behalf of Sedgwick County, has only been opened for business since January 2010 but Presson has been serving as the GM at the facility since June of 2008.

City officials were surprised at the abrupt departure with County Commissioner Gwen Welshimer telling the Wichita Eagle that she was "Dumbfounded" when she learned of Presson's resignation.

"He's done a good job so far," she added. "He's been responsive to our questions and so on."

SMG was reticent to discuss the reasons for Presson's resignation, noting that they were "kind of private." Presson, who is married and has two daughters under the age of ten, told the Eagle that, "Opening a new arena is a very tough job and it takes a lot of time, energy and effort, and it takes a toll on anyone."

SMG said they would be looking for a replacement for Presson from within the ranks. – CelebrityAccess Staff Writers