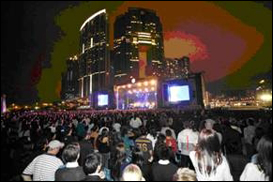 Live Nation also announced it will further strengthen its presence in Hong Kong by appointing Luke Hede in January 2008 to the position of Director of Booking, Asia. Previously with Dainty Consolidated Entertainment, one of the leading promoters in Australia, Mr. Hede was responsible for ticketing and logistics liaising with DCE's touring team.

Colleen Ironside, Live Nation’s Senior Vice President Pan Asia commented: “The superior new Pop TV Arena will provide an ideal platform for both local and international artists to perform and enhance local culture in Hong Kong. As a leading worldwide promoter and venue operator, we look forward to bringing an increasing number of local, regional, mainland and international artists to both Hong Kong and the rest of Asia. In expectation of ramping up our operations, we look forward to welcoming Luke Hede to the team.”

Echoing Live Nation’s comments, Stanley Pong, Chairman of the Cosmedia Group said “We can’t think of a more exciting way to foster better understanding between people around the world than through the exchange of popular cultures. Our Group is committed to promoting young pop culture of 21st Century China to the world. We are honored to team up with the internationally acclaimed Live Nation in this effort.” –by CelebrityAccess Staff Writers