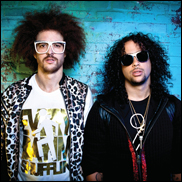 LOS ANGELES (CelebrityAccess MediaWire) — After putting in a performance with Madonna during halftime at the Superbowl, LMFAO is preparing to take their show on the road.

Before becoming MTV's America's Best Dance Crew, Season 3, Quest Crew's energy and charisma captured the attention of audiences with their numerous crew and individual performances on American Idol and So You Think You Can Dance?. Members of Quest Crew have been featured in LMFAO's videos and television performances.

Sidney Samson started DJ-ing in 1995 when he was just 14 and has since become a noted remixer and producer. His single Riverside, charted #1 on the Dutch top 40 and #9 on the ARIA charts.

Having previously collaborated with LMFAO, will.i.am & Chris Brown, Eva gained much acclaim recently with the hit she co-wrote and featured with DJ Afrojack called "Take Over Control.” The single topped iTunes dance charts globally, selling almost a million in the U.S alone so far, and becoming an anthem that has crossed over into mainstream radio worldwide.

Born in Bradford to a Jamaican father and Uruguayan mother, Natalia creates razor-edged pop. Her debut album, Perfectionist, debuted #1 on the US Billboard Heatseekers Chart, and she has toured with Katy Perry, Black Eyed Peas, Ke$ha, Robyn, and Kelis. She is also featured on LMFAO's hit track "Champagne Showers.”