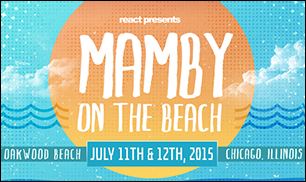 CHICAGO (CelebrityAccess) — React Presents new music festival Mamby on the Beach has partnered with local music television program JBTV to stage a contest that will see the winning band play at the fest.

The contest officially begins Thursday May 21st, and the voting and submissions end on Monday, June 15th at 12pm CST. To enter, bands must upload a video to the contest app on Mamby Beach's Facebook page. The Top 5 finalists will get a chance to play (2 songs) to be recorded at JBTV studios on Wednesday June 17th.

The JBTV judges will then vote on the Top 5 recorded performances to pick the grand prize winner based on the songs' stylistic fit for the festival, musicianship (how well they play their instruments), stage presence, and overall performance. The judges include some of Chicago's rock industry figures such as Greg Corner (JBTV), Lauren O’Neil (101 – WKQX), and JBTV's Jerry Bryant, who will pick the winner from this recorded set to be aired at www.mambybeach.com on Tuesday June 23rd. The winner will be announced on Wednesday June 24th. Best of luck!

Note, the contest is only open to live performances and not DJs.

JBTV is a live music showcase dedicated to live music and breaking bands, has been on the air for 30 years, twice winning the Billboard Music Video Award for ´Best Local/Regional Alternative Modern Rock Show´ and multiple Emmy Awards. The show provided bands such as No Doubt, Blink 182, Green Day, Smashing Pumpkins and Oasis their first television exposure.

Mamby on the Beach is set to take place on the lakefront in Chicago on July 11th & 12th. – Staff Writers