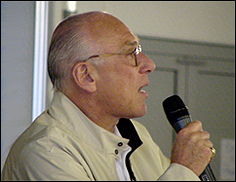 (CelebrityAccess MediaWire) — Marek Lieberberg, organizer of the Berlin Live 8 concert, has said that plans for the July 2 event in the German capital city are being hampered by federal bureacracy and by a lack of interest from German performers.


The Berlin concert, one of the 9 worldwide concerts, has been plagued by last-minute pullouts by performers and by difficulty in finding a venue.

Unlike the British show, which has received massive publicity, it has been barely mentioned by German media. Berlin city officials say site requests were submitted only three weeks ago, long after other events had already booked venues.


Lieberberg said the problems stem from a mix of apathy and indifference in the country.

"A combination of greed, ignorance and Teutonic bureaucracy is thwarting our plans," he told reporters.


He criticized the Bundestag parliament for failing to make the vast grassy plot in front of the historic building available for the concert, as had been hoped.

"At no point have the concert organisers approched us with a request," said Thierse. "And at any rate, it is a matter for Berlin municipal authorities to decide, not the federal government."

Berlin City Senate spokesman Michael Donnermeyer told reporters, "I don't understand the criticism. We have been intensely involved in moving heaven and earth to see that this concert takes place in the Tiergaten west of the Bundestag.

"The problem," he added, "is that the organisers came to us only three weeks ago and their plans are still very vague."

Marek Lieberberg also accused corporated Germany of "not lifting a finger" to help put on the concert by assisting with funding and sponsorship.

Performers have been slow to sign onto the Berlin bill, with the most prominent German rock singer, Herbert Groenemeyer, initially turning down invitations to play, then only agreeing to appear last week.

Similar problems in Italy prompted Sir Bob Geldof, head of the Live 8 initiative, to issue an appeal for Italian stars to turn out for the huge free concert in the Circus Maximus, the ancient Roman chariot race track.

Geldof said any pop act should leap at the chance to play Live 8 as it would be a historical event. –by CelebrityAccess Staff Writers