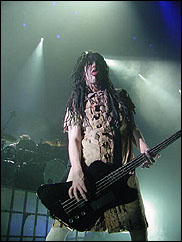 Marilyn Manson has made a dramatic change in style, attitude and personnel by letting go longtime friend and bassist Twiggy Ramirez and replacing him with Tim Skold. Skold used to be with the industrial rock band KMFDM and is the co-producer of the forthcoming Marilyn Manson album.

"I have spent eight months transforming this band and our new songs into an unstoppable juggernaut, and sadly Twiggy wasn't able to make himself a part of it," says Manson. "Unfortunately, I feel that Marilyn Manson, as a lifestyle, is not where his heart is. So I have decided to let him go his own way; otherwise it wouldn't be fair to us, the music, or especially to the fans. Although you can never replace a best friend like Twiggy, this album and new lineup will redefine anyone's idea of what Marilyn Manson is capable of."