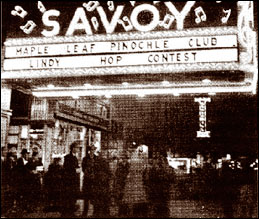 A plaque was officially unveiled on the site of the original and legendary Harlem nightclub, the Savoy Ballroom at 141st Street and Lenox Avenue in New York City, on May 26. The plague reads:

"Here once stood the legendary Savoy Ballroom, a hothouse for the development of jazz in the Swing Era. Visually dazzling and spacious, the Savoy nightly featured the finest jazz bands in the nation, and its house bands included such famous orchestras as those of Fess Williams, Chick Webb and Tedd Hill. The great jazz dancers who appeared on this block-long floor ranged from professionals like Whitey's Lindy Hoppers to everyday Harlemites. During a time of racial segregation and strife, the Savoy was one of the most culturally and racially integrated of institutions, and its fame was international. It was the heartbeat of Harlem's community and a testament to the indomitable spirit and creative impulse of African-Americans. It was a catalyst for innovation where dancers and musicians blended influences to forge new, wide-spread and long-lasting traditions in music and dance. Whether they attended or not, all Americans knew the meaning of 'Stompin' at the Savoy.'