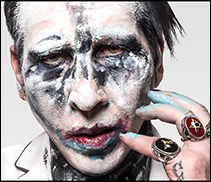 In a post to his social media, Manson, whose real name is Brian Johnson, wrote: "I have decided to part ways with Jeordie White as a member of Marilyn Manson. He will be replaced for the upcoming tour. I wish him well."

While Manson did not offer any insight into his reason for replacing White, the move comes as White faces allegations of sexual and psychological abuse from Jessicka Addams, frontwoman for the riot grrl band Jack Off Jill.

Addams made the allegations in a Facebook post on October 20th, in which she detailed a long relationship with White which began in the 1990s when she was 18. Addams claims that White inflicted emotional and eventually physical abuse on her, including a claimed rape after he concluded a tour with Nine Inch Nails.

"I knew at that point that Jeordie had not been faithful on tour, including being with women whom I to this day respect and considered my musical contemporaries," Addams wrote. "All this led to an argument I never saw coming. He forced me on to the floor with his hand around my neck. I said NO. I said NO. I said it so loud enough, that [Addams' roommate] Pete came rushing in from the other room to get him off of me. But I had been raped. I had been raped by somebody I thought I loved."

Addams also alleged in her post that she was threatened by her label to not publicize her rape allegations or face being "blackballed" by the concert and recording industry. She did not identify the label in her post, but in 1997, Jack Off Jill released Sexless Demons and Scars via Risk Records.

White has yet to publicly respond to Addams' allegations and was unavailable for comment. White first joined Marilyn Manson after Brad "Gidget Gein" Stewart's exit in 1993. He departed the group in 2002 but rejoined in 2008. He has also performed with other groups including Nine Inch Nails and Oasis. He is currently the lead vocalist for industrial rock band Goon Moon.