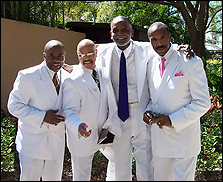 Linwood Peel has been the leader of The Drifters and The Elsbeary Hobbs Drifters since the 1991-1992 season. Due to a court ruling this fall, the name The Drifters can no longer be used. Now MSP has seized this opportunity to commemorate and bring you the exact same show, uniting Linwood and his former group members as Linwood Peel's Tribute to The Drifters.

With their format of Classic Rock, Classic R&B, Oldies, Pop, Male, '50s, '60s and '70s, much of the great material is still known, sung and covered world-wide; including some of The Drifters’ Million Sellers: “On Broadway,” “Under the Boardwalk,” “There Goes My Baby,” “This Magic Moment,” “Save the Last Dance For Me,” “Up On the Roof,” and “Dance With Me.”

Although not scheduled to perform and with less than 10 minutes to go, when asked by Producer Mark Sonder to step in to perform the National Anthem in front of an indoor stadium full of people at the New England Basketball Hall of Fame Induction Ceremony, Sonder asked "Can you be ready?" and Peel replied "No problem, I was born to sing!" –by CelebrityAccess Staff Writers