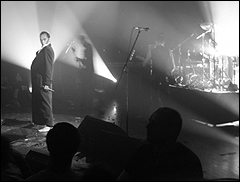 Originally named for the mid-20th century hot spot, The Town Casino, the venue has become a major stop for touring artists in the Northeast and since opening in 2005, the club has hosted concerts by The Goo Goo Dolls and moe., as well as Tragically Hip, Ryan Adams, Megadeth, Social Distortion, and The Jonas Brothers.

Kwitchoff has long experience in the industry, starting to book shows while in high school during the mid-1980s and then as an indie promoter, growing Funtime Presents into a regional presence while managing the career of The Goo Goo Dolls. Kwitchoff then joined Clear Channel and spent more than half a decade there before re-launching Funtime Presents with his business partner Donny Kutzbach.

John Peter's Mass Concerts, originally founded in 1994 has been expanding in the Northeast as well and recently acquired the Webster Theatre in Hartford, CT. In addition to the Town Ballroom and The Webster, Mass Concerts also manages the 2160 cap. Palladium in Worcester Mass. – CelebrityAccess Staff Writers