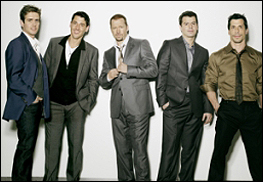 
In a blog posting on their website Donnie Wahlberg said: "We are, in fact, in the middle of a worldwide recession and we just cannot make it work."


He added they had "exhausted efforts" to get the tour off the ground but it was proving to be "too complex".


Last year the band, known for Right Stuff and Hangin' Tough, reformed and released their first album in 14 years.


Since then the band has been touring around the US.


Wahlberg said: "In response to so many of the Aussie fans' amazing efforts and the collecting of signatures of thousands – our promoters, as well as our management team, worked incredibly hard to make an Australian tour a reality.


"Despite warnings that the financial problems plaguing the world would compromise the Australian tour – they never gave up on this dream and neither did we.


He said the group were "saddened" as Australia had "always been one of our favourite places to travel to".


He added: "We can only assure you that when the recession's stranglehold on the world's economies eases up a bit – we will find a way to make this work."


The group were a huge success in the early 90s, but went their separate ways in 1994. –According to BBC