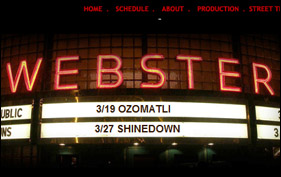 HARTFORD, CT (CelebrityAccess MediaWire) — John Peters, CEO of promoter MassConcerts has announced that they have purchased the 1,250-capacity Webster Theatre in Hartford, bringing down the curtain on more than 70 years of family ownership for the venue.

Originally built in 1937, the art-deco theatre has had a long life as a movie theatre before finally transitioning to a live music venue in 1996. Since then, it has played host to concerts by numerous major touring artists, including No Doubt, The Flaming Lips, Jay-Z and the Kings of Leon to name a few.

As to why former Webster owner Justine Robertson decided to sell the originally theatre built by her family, she told the Hartford Courant, "It's a very stressful business, and it's time for me to go back to being a wife, a mother and a grandmother. I loved the business, but it seemed to me like it was the time to do it."

According to the Courant, Robertson first pitched Peters on the theatre late last year and he agreed to the sale in January, shortly before taking over booking duties for the theatre.

"We're really excited to have the Webster," Peters told the Courant. "It's a good club, it's been there for a while and the list of acts that have played there is a mile long."

MassConcerts is a dominant regional promoter, second only to behemoth Live Nation, booking approximately 200 shows a year. MassConcerts operates numerous other venues in the northeast, including The Worcester Palladium and the Hippodrome.

Peters isn't planning for any major changes to operations at the Webster. "We're basically taking over a fully functioning and profitable business that's up and going, so there's no reason to make changes for the sake of changes," he told the Courant. – CelebrityAccess Staff Writers