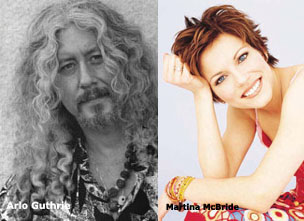 "We're thrilled that Martina and Arlo will be joining us at Farm Aid this year,'' said Farm Aid's Executive Director Carolyn Mugar. "Their addition to the line-up of artists will make this year's concert memorable for all.''

The event will be telecast by CMT and marks the fourth consecutive year that CMT has been the exclusive television network for the Farm Aid concert.

Farm Aid was founded in 1985 to raise public awareness about the plight of the American family farmer and to provide assistance to those families whose livelihood depends on agriculture. In the past 16 years, Farm Aid has granted nearly $16 million to more than 100 farm organizations, churches and service agencies in 44 states. This year's event will be the 14th concert.