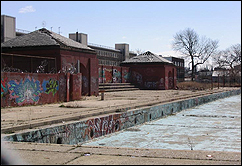 BROOKLYN, NY (CelebrityAccess MediaWire) — After a three year stint of memorable concerts, the McCarren Park Pool will be closed down following a final August 30th Sonic Youth Concert to prepare for extensive renovations.

Located in Brookyln, the massive pool was part of McCarren Park and opened in 1936 by the Works Progress Administration. Originally designed to accommodate 6,000 swimmers, the pool was eventually closed in 1984 and languished unused due to contention over the rehabilitation of the site. Flash forward to 2005 when Clear Channel and Sens Productions donated $250,000 to the City to provide for some essential safety upgrades and the following year, free live performance events started to be staged at the site.

"We're definitely sad to be losing the place," a party promoter with JellyNYC, Dan McGinley, told the New York Sun. "It's a huge space, a very unique space, with a lot of history. A lot of people had a lot of good times there before we started putting on shows."

The pool will be rehabbed to the tune of $50 million with a reopening date targeted for 2011 as part of the city's City's PlaNYC program. – CelebrityAccess Staff Writers