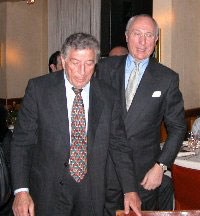 MIJF chairman Albert Dadon says he expects next year's festival (May 5-14) to feature up to a dozen international artists, boosting the profile of the seven-year-old event which has previously focused predominantly on local acts. "The Melbourne International Jazz Festival is finally becoming international," Dadon says. "In terms of tourism it is tremendous news for Melbourne, Australia and jazz. In terms of the art form this will dramatically raise the musical bar in our country."

Dadon says also that the Umbria Jazz name will be used in marketing Melbourne's event. He expects there will be opportunities for Melbourne musicians to appear at Umbria as a result of Pagnotta's involvement. Pagnotta replaces local jazz veteran Adrian Jackson, who has run the Melbourne festival since its inception in 1998.

Since then the festival board has been overhauled with many marketing and business people appointed, and businessman Dadon has taken over as chairman from Michael Tortoni, who runs Melbourne jazz club Bennetts Lane.

The City of Melbourne and Arts Victoria have returned, and new supporters, including the City of Stonnington and sponsors Saab, Yamaha and the National Australia Bank, have also come on board. Most significantly, the 2004 event was moved from January to May in a bid to position it away from summer holiday leisure competition and give it a firmer presence on the city's cultural calendar.

Pagnotta's connections with Melbourne – he has visited Australia before – were strengthened when he was invited to sit on the jury of this year's Bell Awards for jazz musicians. "He has a fantastic track record as a jazz director," says Jackson. "there's not an artist in the jazz world who wouldn't return his call. The event will become much bigger in scale and will hopefully raise the profile of jazz in Melbourne and expand its audience base."
–Bob Grossweiner and Jane Cohen