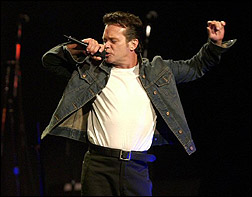 (CelebrityAccess News Service) – Nearly 26 years after Elvis Presley's untimely death, America Online will air John Mellencamp's landmark Sessions@AOL Full Set at Elvis' home, Graceland, exclusively on AOL for Broadband on August 11. This special AOL event marks the first time Sessions@AOL has been taped at such a historic location and the first time that an artist has performed at Graceland exclusively for an online audience.

room to see Mellencamp perform tracks from his new album of traditional works, Trouble No More, as well as covers of "House of the Rising Sun" and Bob Dylan's "Highway 61." Mellencamp also performs an inspired rendition of the Arthur Crudup-penned Elvis classic "That's All Right (Mama)." The Sessions@AOL Full Set will launch with the kick off of a week of Elvis-related, AOL exclusives that celebrate the life and music of the rock 'n roll pioneer.

Beginning August 11, at AOL Keyword: Elvis, AOL for Broadband members can stream Mellencamp's entire Sessions@AOL Full Set from start to finish, or check out each song individually on demand. AOL's narrowband members will also be able to access one song from the Full Set.

"I'm both humble and proud to have been invited to perform at Graceland," said Mellancamp.

"It is an honor to offer our members an insider's glimpse at of one of Rock's seminal songwriters performing from this historic location, and John Mellencamp was the perfect choice, as he is a fan and a true legend in his own right, " stated Evan Harrison, general manager of AOL Music.

"As a major Elvis fan, it's fitting that John be the first artist to perform for an online audience from Graceland. With over 50% of our Graceland visitors under the age of 35, he is the perfect fan to help introduce Elvis to new generations," stated Jennifer Burgess, director of marketing for EPE. "The internet has dramatically changed the way fans experience music. As the leader in online music entertainment, AOL is the ideal partner to enable young, music savvy fans to discover more about Elvis and his continuing influence on contemporary artists."