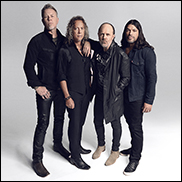 STOCKHOLM, Sweden (CelebrityAccess) — American rock band Metallica and the Afghanistan National Institute of Music (ANIM) along with its founder and director and Dr. Ahmad Sarmast, have been selected laureates for the 2018 Polar Music Prize.

Likening Metallica to composers such as Wagner and Tchaikovsky, the band was recognized for the visceral speed and physicality of their music, as well as its accessibility.

“Through virtuoso ensemble playing and its use of extremely accelerated tempos, Metallica has taken rock music to places it had never been before. In Metallica’s world, both a teenage bedroom and a concert hall can be transformed into a Valhalla. The strength of the band’s uncompromising albums has helped millions of listeners to transform their sense of alienation into a superpower,” Polar Music Prize organizers said of the band.

The organization also selected the Afghanistan National Institute of Music as a laureate for 2018, citing the school’s crucial role in sustaining Afghanistan’s rich musical heritage in the face of conflict and religious austerity.

“In 2008, Dr. Sarmast, the son of a famous conductor, returned to Kabul, at great personal risk, to establish ANIM. ANIM, a decade on, flourishes and is committed to preserving Afghanistan’s rich musical heritage and to providing a safe learning environment to hundreds of boys and girls,” the Polar Music Prize Award Committee said.

Founded in 1989 by the late Stig ”Stikkan” Anderson, publisher, lyricist and manager of ABBA, the Polar Music Prize honors individuals, groups or institutions for international recognition of excellence in the world of music. Each year, the organization selects two laureates from a group of nominees submitted to an independent 12-member prize committee. The committee receives nominations from the public as well as from the International Music Council, the UNESCO founded NGO which promotes geographical and musical diversity.