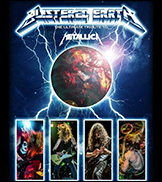 PORTLAND, OR ((Hypebot) –
One always wonders what the real bands think of other musicians getting up on stage and paying "tribute" by doing note by note and often move for move reenactments of entire shows. Metallica, at least, decided to say, "HELL YES!".

Last weekend, Metallica tribute band Blistered Earth played a show in Portland, Oregon. After their show, their van was broken into, and all their gear stolen. The band posted a list of everything lost on Twitter and their Facebook page:

Here's the complete list of everything that was stolen from us on Saturday. We really appreciate everyone's feedback and the support from people in Portland has been overwhelming. Proof that you can't judge a city based on a few bad apples.

Hearing of the theft, the real Metallica reached out and replaced the tribute band's gear. And they did so without a the usual fanfare and Instagram photo opp. But Blistered Earth posted this thank-you to their social medias.

Sometimes when bad things happen it really brings out the best in people. Thanx to the the attention you guys helped bring to the matter of our stolen gear & KATU and KOIN in Portland airing the story, James & the rest of the guys in Metallica ( thanx guys) have seen fit to replace our equipment. Thank you guys!! Special thanx to Tony D!!