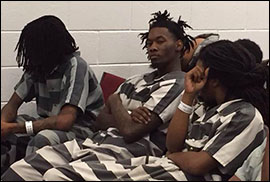 STATESBORO (CelebrityAccess) — All three members of the Atlanta rap group Migos were arrested on Saturday after a concert at Georgia Southern University's Spring Bling was cut short.

Police reportedly smelled a strong odor of marijuana coming from the group's van and investigated the vehicle while the group was performing.

Police then ended the concert and arrested all of the members of the group along with a number of unidentified individuals who had been traveling with Migos.

According to the Bulloch Sheriff Department, Quavo and Offset remain in custody pending a bond hearing. Migos next scheduled perfomance is at is set for The Rave in Milwaukee on May 1st. As of yet, there has been no word if the show is still on. – Staff Writers