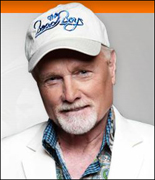 LOS ANGELES (CelebrityAccess MediaWire) – After recent reports that Mike Love, one of the founding members of the Beach Boys, had in effect, fired Brian Wilson and Mike Jardine when he announced his intention to tour with an alternate lineup for the band, Love felt the need to set the record straight.

Love says that he was on an emotional high after the final show of the band's successful 50th Anniversary Tour until he heard the media reports.

"We didn’t just show up for this tour like some museum act. We sang well. We played well. We moved people and we touched a lot of hearts. And it was beautiful. That’s not easy for any band, let alone one with our history," Love told the Los Angeles Times.

"Then I get on the plane buzzing with excitement, and I start reading a lot of nasty gossip and I’m heartbroken. I didn’t want the divisive and ugly rumors of the last week to tarnish the experience of fans and the high note we ended the tour on. So, this is my attempt to set the record straight on the recent stories regarding the family I love and the music that has been my life for 50 years."

According to Love, the tour had always been planned as a limited run and initially, Wilson had just planned to join the tour for a few dates and only later expanded that to full 75 dates that comprised the tour.

"Like any good party, no one wanted it to end. However, that was impossible, given that we had already set up shows in smaller cities with a different configuration of the band — the configuration that had been touring together every year for the last 13 years. Brian and Al would not be joining for these small market dates, as was long agreed upon," Love said.

"It is not feasible, both logistically and economically, for the 50th anniversary tour to play these markets. It’s vitally important for the smaller markets to experience our live shows, as this is how we’ve maintained a loyal fan base for 50 years. You can’t sustain a fan base on a great catalog alone. You must take your music directly to the people," he added. – CelebrityAccess Staff Writers