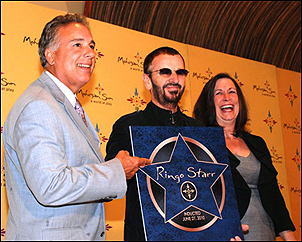 MONTVILLE, CT (CelebrityAccess MediaWire) — The Mohegan Sun Casino has added another name to their walk of fame, that of former Beatles drummer Ringo Starr.

Starr is the 19th recipient of a star on the casino's walk of fame, joining other artists such as Rod Stewart, Tim McGraw, Taylor Swift, Keith Urban and Aaron Lewis, who have been recognized by the Sun for their contributions to music.

Ringo thanked the crowd, saying that he felt "incredibly honored" to be recognized with the award. Starr has been performing for more than 40 years, both with the Beatles and his own band.

"While I was changing my shirt, Ringo and the Beatles were changing the world. Not only from a musical standpoint, but from a cultural perspective that will never be replicated." said Tom Cantone, Vice President of Sports & Entertainment at the Sun.

Shortly after receiving his star, Ringo and All Star Band performed in the arena for the 4th time. Since their first gig at the Sun in 1989, Ringo and the All-Stars have played for more than 30,000 fans at the casino.

"I love coming to Mohegan Sun, they have always taken good care of me and the arena is a world-class venue." Starr said.

Ringo, who just celebrated his 70th birthday is perhaps best known as the drummer for the Beatles but he has had some major hits on his own, as well, including "Photograph" and "It don't come easy", which both charted in the top ten.