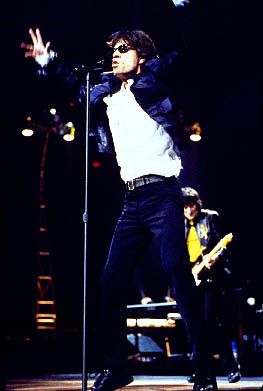 The four-hour live performance on Oct. 20 will air from Madison Square Garden in New York City. The concert will benefit the victims of the Sept. 11 attack on New York City and pay tribute to the spirit of New York and the heroism of the rescue workers who worked tirelessly to save others and continue to work in their recovery effort. Five thousand members of the New York Fire, Police and Rescue crews and their families will be in attendance as guests.

"The Concert For New York" will be telecast live and commercial free on VH1 and simulcast on the VH1 Radio Network and Westwood One. It will also be broadcast on television and radio networks around the world. All telecasts will feature a phone number and web address for charitable donations.

Sir Paul was in New York when the attacks happened, and he told BBC London Live he, like the city as a whole, had been deeply affected by it. He spoke of his visit to "ground zero", and how he was moved by the "heroism" of the firemen.

– My dad was a fireman in World War II in Liverpool, so I have a lot of respect for firemen. You and I want to run out of a building and they have got to run in, he said.

Sir Paul said that he was planning to do something for the victims of the attacks when the offer of the concert came up.

– I thought I'd do that. Mainly, in my case, for the firemen's families, Paul McCartney said.